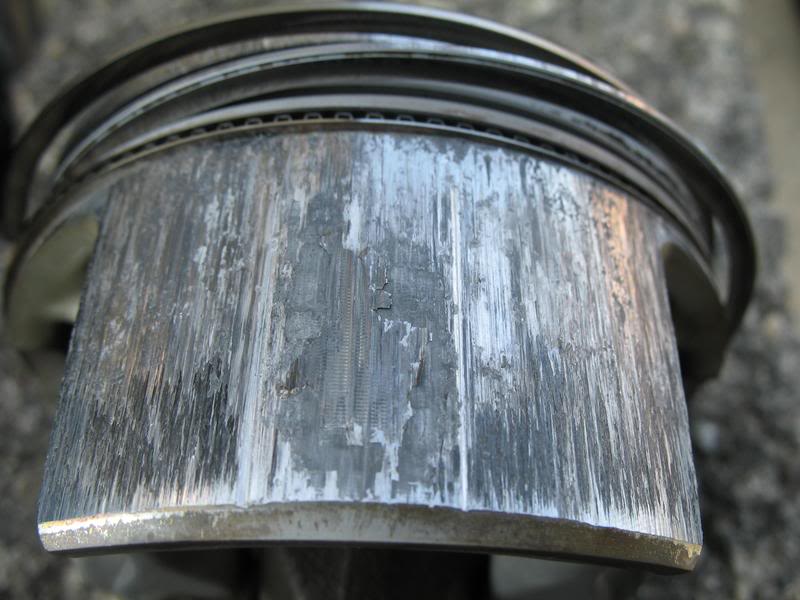 Although rare and more prone to happen in colder climates, the later 3.6 cylinder engines have been known to develop piston and cylinder wall scoring. Based on published information, scoring may be due to a few factors. One is the position of the oil nozzles that spray lubricant vertically rather than upward. Instead the oil winds up at the bottom of the cylinder wall instead of the top. The picture to the right shows an oil nozzle removed from a 3.4 engine. 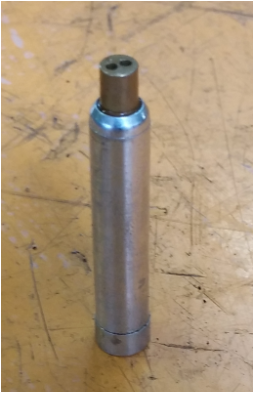 Two, is the amount of upward pressure exerted on the piston. The lack of oil being directed to the top of the cylinder wall and the angle of upward thrust force exerted on that wall seem to be the cause of the scoring. Three is the rotation of the crankshaft that splashes oil in the direction of pistons 1-2-3 keeping that bank continuously lubricated. Lubrication is critical during cold start up.

The three pictures below show the placement of the injector that exits oil out of the crankshaft cradle. The top picture below shows the crankcase cradle and the white arrows point to the exit openings for the oil nozzles on one bank of cylinders. The second picture has a cylinder placed in front of the oil nozzle to show the relative location of each part. The black arrow points to the oil injector’s outlet. The third picture below shows where the oil winds up after being sprayed. You will note that all the oil has been sprayed in a horizontal direction and none toward the top of the cylinder. This can be problematic for three cylinders at cold start up. 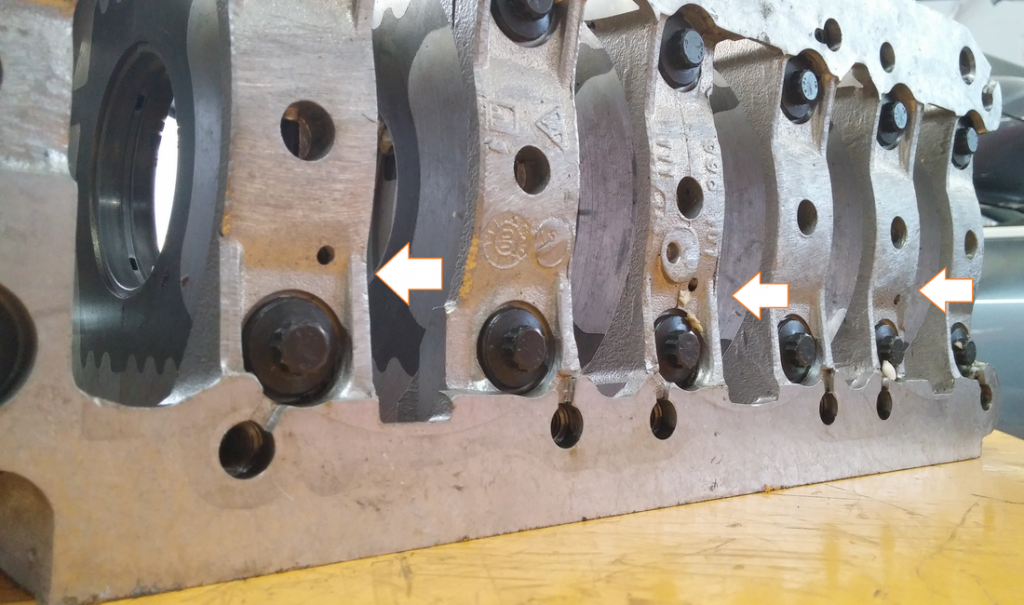 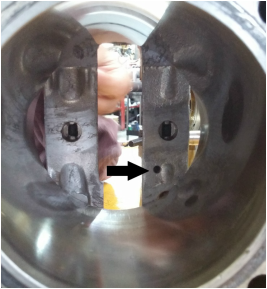 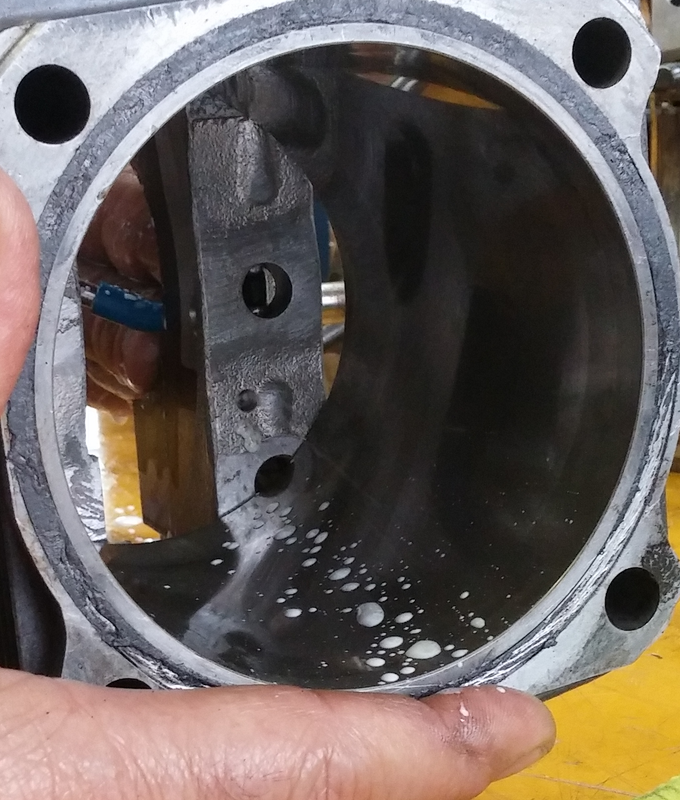 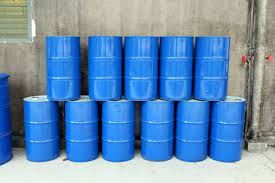 Oil leaks are synonymous with flat six Porsche engines. It’s a point of pride for many of us 911 owners. It’s been said that a 911 without an oil leak is an unloved 911. It’s also a constant reminder that oil is the life sustenance of every Porsche engine.

If ever there was a 911 whose weaknesses are most associated with oil it is the M96 motor. As far as we’re concerned frequent oil change intervals are a non-negotiable. We like frequent oil changes. In addition to all the physical, chemical and kinetic factors, oil changes are an inexpensive way of keeping us more connected to our cars. Oil changes are acts of love; evidence that we care about our 911s. And for those of us DIYers, it tells the neighbors and work colleagues that we got big ones.

We like choices and try different Porsche recommended oils. We like oils with Porsche written on the label, containers designed with fancy spouts, race sponsored oil, oils approved by someone, oils that have lots of comments from users, oils that contain detergents and dispersants and inhibit oxidation, corrosion, rust, foam, wear, etc. We like labels with lots of paragraphs and acronyms and foreign languages. We like oils that state they were made in Germany because our cars were made in Germany. We also like oil additives because they add things to the oil we like. And we like additives to make the oil last longer even though changing the oil with great frequency nullifies the need to use additives.

We like to watch the oil as it is draining. We open up and examine the filter for metal particles. We send our oils to labs for analysis and a feedback report. And we love the “whew, all is good” feeling a few weeks later in the oil analysis report. We like 0w-40 and 5w-40 oils because the “w” indicates a different viscosity which is a fancy word for thickness in the cold.

We like reading about oil recommendations found on numerous forums. And we like to see “here we go again” repeated dozens of time by posters along with expert reviews about oil brands from pundits who have incontrovertible evidence using a sample size of one.

As you can see, oil is a lifestyle. Have your oil changed. 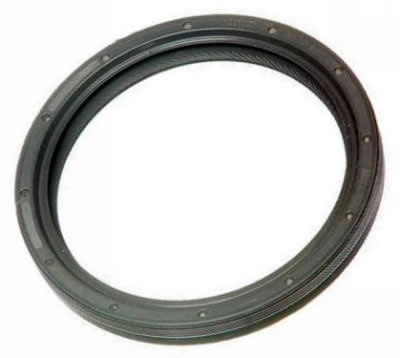 The first picture above compares the end of an aircooled crankshaft to the end of a water-cooled (M96) crankshaft. While both crankshafts have a flywheel connected to the end, the M96 motor has has the added forces of chain, a heavy flywheel-clutch combination (42lbs.) and a longer distance from its support bearing. All forces working against a smooth spinning crank.

Compared to the previous engine design, the M96 crankshaft has one less main bearing than the air-cooled versions, air-cooled with 8 main bearings and 7 on the M96. This design leaves the 996 engine susceptible to greater vibration and becomes the source for oil leaks through the RMS seal. It is also one of the reasons for premature bearing 7 wear. 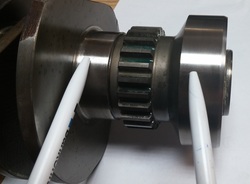 RMS failure can occur at any time. Replacement of the seal is simple as the part is relatively inexpensive, but because it requires engine removal the labor can be cost prohibitive when it becomes a regular occurrence. Bearing 7 has been known to wear excessively due to an out of round crank and leading to expensive crankshaft related repairs.

In the video and first picture below you see a out of round crankshaft. This part was removed from a 996 with 60,000 miles. As the crankshaft rotates, the dial indicator should remain steady. Instead what you see is a crank that was twisted with evidence of how far out of round it is.

Aftermarket automotive engineers are working right now to resolve this problem and we expect an effective and permanent solution to this problem. For example, check out the next two pictures below. Aftermarket engineers have devised a solution to the crankshaft problem by inserting an additional main bearing. This creates much needed support for crankshaft seal surface and reduces the forces from the chain and flywheel on the crank. The additional support utilizes the existing rear main seal area and a different seal is utilized as the rear main seal. This new design has a channel to lube the area and allows for the rear main seal and bearing to share the same friction area of the crankshaft to reduce vibration on the seal and thus reducing the risk for oil leak. The engineers tell us that the additional support also yields a smoother running engine and longer lasting seal and bearing. 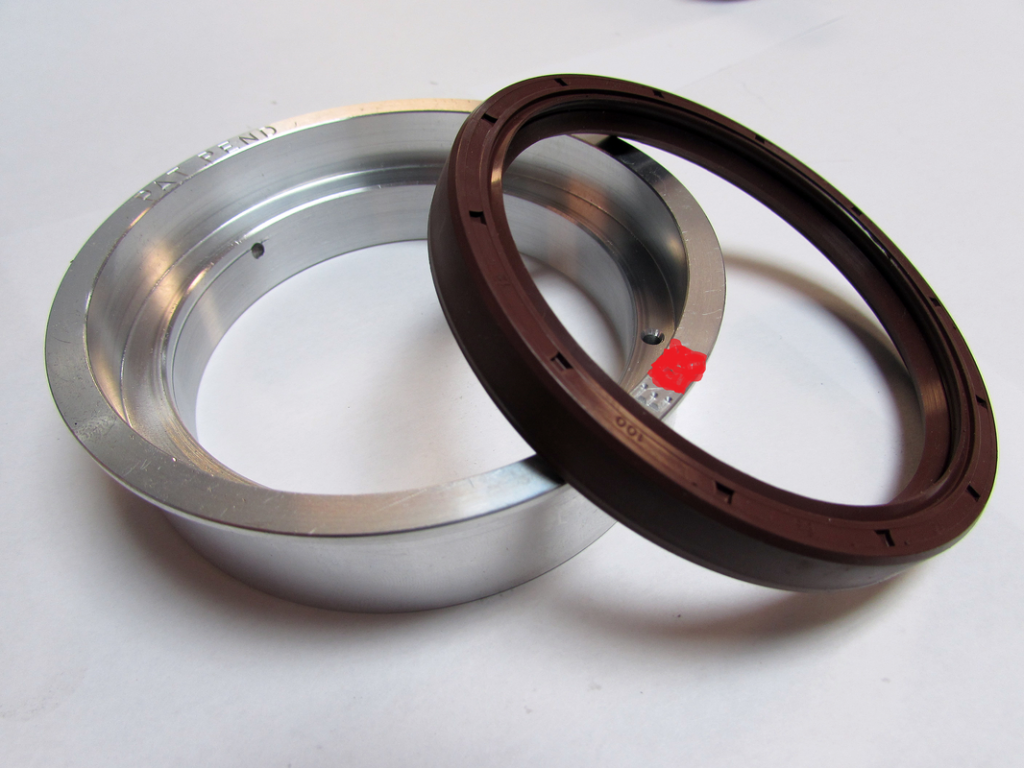 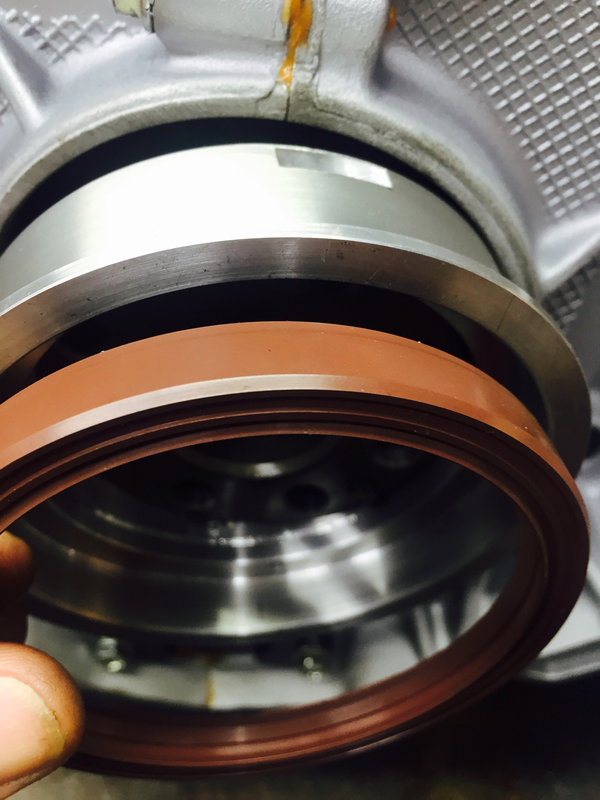 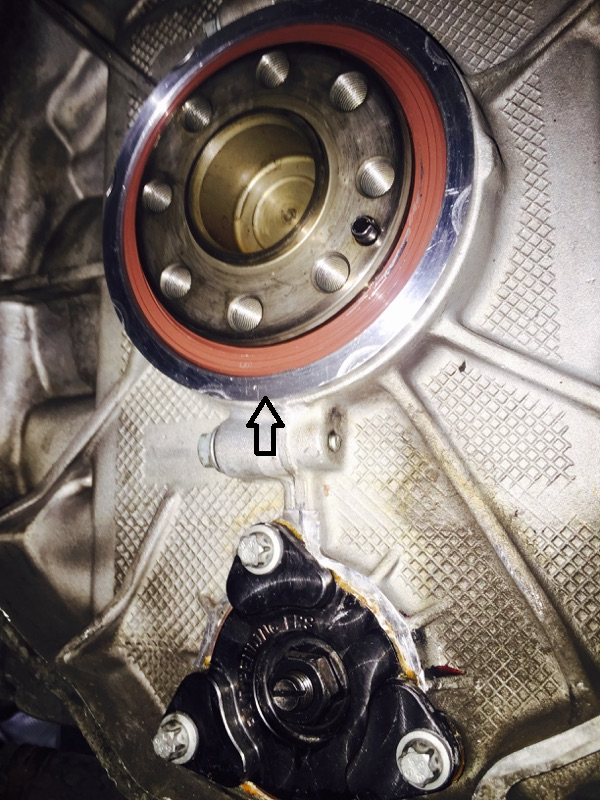 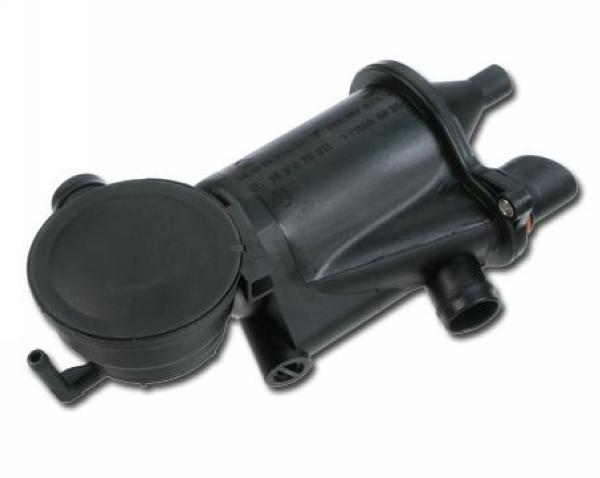 When the AOS is working, the oil is routed back to the crank, but when the membrane in the AOS stops working, the pressure reverses and the oil begins to work its way up the tube and eventually in the manifold.

When the air oil separator stops working the oil that should have been sent back to the crank winds up accumulating as a pool at the top of the intake manifold.
Because of the design of the manifold the oil accumulates as a reservoir. This is a big problem as it elevates the risk for oil filling the cylinder’s combustion chamber. Oil is a liquid and does not allow the piston to complete its upstroke compression stroke. This can lead to a condition called hydrolock and that is discussed in the Hydrolock section elsewhere in this website.

Like most classic Porsches, engine rebuilds will eventually are an inevitable future for long-term owners. At this point many 996 owners have reported high mileage cars in need of rebuilds, the caretakers of this site being among them.

In this area, Porsche owners can purchase a crate engine directly from Porsche. They can also have their engines rebuilt by one of the rebuilders that offer nationwide services.

We have found a few that provide solid robust and reliable rebuilds that address the issues on this page. Owners who properly maintain their rebuilds have reported “bullet-proof” engines. A term usually associated with the air-cooled motors.