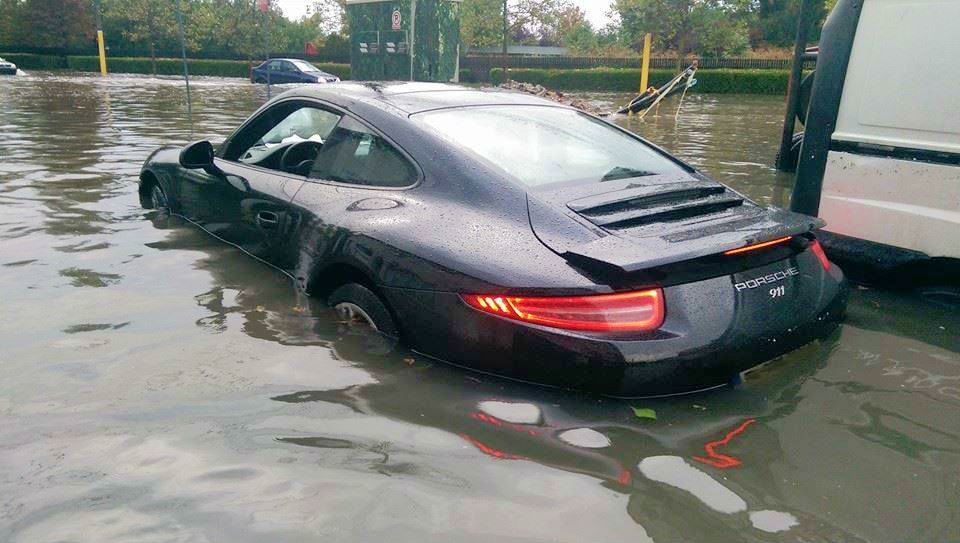 While hydrostatic lock is normally associated with damage from water or radiator fluid, liquid oil can be just as damaging to the combustion chamber. The M96 and M97 engines are vulnerable to hydrolock from oil even under normal driving conditions. Porsche engine experts who work one these cars on a daily basis will tell you that damage to engines due to symptoms related to hydrolock is as ubiquitous if not more so than the intermediate shaft bearing problem. They tell us that this issue may have been overshadowed by all the internet chatter, press and class-action lawsuit given to Intermediate Shaft Bearing. However, hydrolock should not be ignored as a serious risk for the 996, 986 (Boxsters and Caymans), and early 997s. One of the problems is that unlike the IMSB failure that can be traced to the source of the problem from metal fragments, hydrolock does not provide easily discernible evidence that allows the technician to trace the damage back to its origins, especially since oil is expected to be seen in its natural environment. Many times the correct diagnosis is missed.

The combustion chamber is intended to work in an environment of air and gas along with minuscule particles of oil from the PCV system blow-by. During the compression stroke at the point where intake and exhaust valves are closed that air/fuel mixture compresses in preparation for ignition. The next stage is called the power stroke where the spark plug ignites the mixture in the combustion chamber and literally explodes, and the effect is to push the piston down. That forces causes the crankshaft to rotate and all is good. However, like water, unintended large volumes of oil will not compress or ignite in the manner the chamber was designed to do. The oil then acts as a force against the piston and thanks to the laws of “ideal gas” and thermodynamics, the piston stops, rod bends, cylinder sleeve cracks, and the crankshaft is bent. The effect is almost instantaneous and the crankcase can be ruined in the process, the crankshaft bearings destroyed and the shock can even cause cracks in the engine block. The effect of hydrolock can be catastrophic.

Why is the M96.M97 motor any more vulnerable to hydrolock than any other vehicle? It is because PCV oil can accumulate over time at the top of the manifold in a reservoir-like cavity that allows it pool. The arrow in the picture below shows where the oil accumulates. Normally occurring PCV blow-by oil are tiny particles that build up over time in the cavity of the intake manifold, that oil will pool to to become a source of liquid oil that could then be absorbed by the engine as a gulp.

Should a small amount of oil make its way down to the cylinder head, damage is not likely but the evidence can be seen in the form of a random (or chronic in more serious cases) puff of white smoke from the exhaust. However, should a large enough quantity pour into a cylinder as a gulp, the results are not limited to environmental damage. A hydro lock event will cause major damage to the engine.

Unlike an IMSB event that can occur without warning, hydrolock fortunately provides a warning in the form of smoke coming out of the exhaust. If you see smoke exiting your exhaust pipes, one of the reasons can be due to small amounts of oil making their way into the combustion chamber. Of course smoking exhaust can also be caused by other problems, but if it is due to oil accumulation in the manifold reservoir the engine needs immediate attention.

The photograph below left, indicates the location of where the oil accumulates in the manifold. There are two manifolds per engine and each has the same design where oil can accumulate.

The photograph below right, shows where the liquid goes when the manifold is tilted to show the liquid seep down the runners. The same effect could happen after a sharp turn or sudden stop.

The image below shows two normal M96 rods next to two similar rods that have been damaged due hydrolock from seeping oil that originated in the manifold. The two bent rods were not able to complete their compression stroke because the combustion chamber was filled with liquid oil.

The final photograph shows the effect of hydrolock on a cylinder wall.